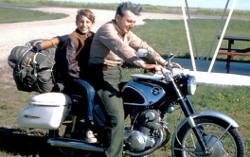 Robert Pirsig, author of the iconic novel Zen and the Art of Motorcycle Maintenance, has died at the age of 88 ‘after a period of failing health’.

After being rejected by more than 120 publishers, Zen and the Art of Motorcycle Maintenance was published in 1974 to rave reviews and huge popularity. It remained near the top of the best-sellers list for a decade and has sold around five million copies.

Loosely autobiographical, it is a first-person father-son story that draws on a 17-day motorcycle trip Robert Pirsig took across the US in 1968 with his 11-year-old son, Chris. The story is widely viewed as a reflection on metaphysics and existential philosophy rather than a book on how to repair a motorcycle. It also contains flashbacks to a period in which the author was diagnosed as schizophrenic.

Robert Pirsig, a biochemist by training, published a sequel, Lila: An Inquiry Into Morals, in 1991 with less commercial successful.

Robert Pirsig lived the last 30 years in South Berwick, Maine, US, and is survived by his wife Wendy, two children and three grandchildren. His son Chris dies in 1979.