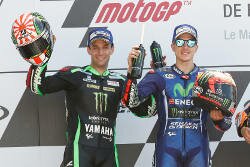 Yamaha MotoGP rider Maverick Viñales came out fighting, dominating the MotoGP field to take a sensational victory at the Grand Prix de France, sealing Yamaha’s 500th Grand Prix win. Valentino Rossi also showed a blistering pace in the French sunshine at the Le Mans Bugatti Grand Prix race circuit. He was scrapping with his teammate in an epic podium battle for the win, but suffered an unlucky fall on the last lap.

Viñales was strong right from the beginning of the 28-lap French round. Starting from pole, he flew off the line to take the holeshot and slotted into second as he dived into turn 3, behind Johann Zarco. The Spaniard was on the case, shadowed by his teammate. With 22 laps Viñales made a textbook move on the satellite Yamaha rookie to take over the lead.

Now at the front, the Spaniard put the hammer down. He did everything in his power to escape from Zarco. He managed his pace to perfection and made sure he held on to his P1 position until he got in a fierce battle with a rapidly approaching Rossi, but the number 25 rider held firm. He was leading on the last lap, when the Doctor crashed out of the race, allowing him to bring his YZR-M1 over the finish line, 3.134s ahead of his closest rival.

Johann Zarco delivered a sublime performance today at the legendary Le Mans circuit to storm to a maiden premier class podium in the memorable round 5 fight. The home hero began the sprint from 3rd on the grid and quickly surged to the front of the highly competitive field for the opening six laps. After fearlessly dicing with the leaders, the MotoGP rookie met the chequered flag in 2nd to sweeten Yamaha's 500th Grand Prix win.

Dani Pedrosa scored his third consecutive podium finish after starting the French GP from the 13th spot on the grid and making a great comeback to finish third in front of over 104,000 spectators, a new record for the Le Mans event. The last time Dani was in the top three for three consecutive races was in 2014 (Catalunya, Assen, Sachsenring). He is now third on the list of most career podium finishes with 147, behind Agostini and Rossi.

Rossi had a good start from second on the grid and put his Yamaha in fourth position behind Marc Marquez after the first couple of corners, only to pass the Spaniard a few turns later. Outbraking himself with 16 laps to go, the Italian lost some time, which left him within the grasp of Marquez. The Doctor responded quickly to the situation and upped his pace as the Spaniard crashed out of the race, allowing Rossi to focus on the battle in front. With five laps to go, he overtook Zarco for second place, making it a perfect Movistar Yamaha 1-2, but the nine-time World Champion was hungry for more and a small mistake from Rossi on the last lap prohibited him from reaching the finish line after a hard-fought battle.

Movistar Yamaha, Position: 1st
Keeping up with Johann in the early laps of the race was hard, he was really fast and with the full tank we were not so strong as him. He was exiting from the corners really good and really fast. Then his tire started to drop a little bit and our tire started to work good on the rear, and lap by lap I was feeling better. Until the end, in the last lap, I gave everything I had here in the French GP and, honestly, I'm so happy and so pleased. The team was working on an incredible level this weekend, I hope we can continue like that. For sure the tires were working really good here, we hope we can work like this also in Mugello.

Monster Yamaha Tech3, Position: 2nd
The result feels so good and there are many words that I could use, but today has been just great. The conditions were perfect for me in the race with the soft tire and it was fantastic that I was able to run the pace that I did and to also lead a GP again. I had one flashback of Qatar in my mind, yet, everything was better here than there! Vinales passed me on the 7th lap and from that moment I was just happy to stay with him, and he was fast, but I think that this was the key for me to getting the podium. Rossi was also strong, but it's a bit complicated to fight in Le Mans because the track is tight, so I was thinking that even though 3rd at the time was fantastic, if they fight like that, maybe something will happen and I can get a better position, and this came true. My result is super and it was so much fun today. The crowd made a lot of noise and there was positive energy. I didn't feel it at the time, but now I realize that they brought me to the top and now I need to enjoy this moment. I'm a rookie and I am not looking at the Championship and the most important thing is to finish races and collect points, and today I got 20, which is fantastic. I am living in the present and enjoying every round, so if this 2nd place gives me a good advantage in the standing, then I will take it.

Repsol Honda, Position: 3rd
I’m super happy about this podium because I knew it would be quite tough to manage the race well starting from the fifth row on the grid. The thought of getting through that first chicane at the back of the pack meant a lot of pressure. It was a demanding mental exercise to try and be fast but not crash, being aggressive but calm! But in the end I got a good start, entered the first corner quite well, and quickly settled into a good rhythm. I recovered some positions and also touched with Cal Crutchlow along the way. I’m sorry for that but really it wasn’t intentional. I had just moved past Dovi and wasn’t going to pass Cal Crutchlow in that corner, but he made a little mistake that opened the line slightly, so I got through on the inside and we touched. I’m happy nothing really happened there. After Marc Marquez crashed, I kept pushing but I was two seconds behind the Yamahas. I was starting to feel some chattering, and I decided to stay calm as I didn’t want to make a mistake. I think we had a good race and a very good result for the Championship. It’s just a shame that this weekend we couldn’t do well in qualifying, but we’re working with the team very well and the feeling with the bike is improving little by little. We just have to continue on this path for the next races.”

Movistar Yamaha, Position: DNF
It was a great shame, because for my team it was the best weekend of the season, where I was more competitive on the track, also in the wet, but especially in the race. For sure, for me this could have been the best result of the season. It was very difficult because the pace was always very high, but at the end I felt comfortable on the bike, I had a good feeling, so I tried to attack. Unfortunately, on the last lap I made a mistake in turn 6 and I fell back a little, so Maverick could overtake me. I knew I had another chance, because we were very close and I tried to remain there, because in sector 4 I was good. Sincerely, what happened during the crash, we don't understand. Usually you have to pay attention to the front, but I lost the rear when I crashed. Anyway, I made a mistake, and it's like this. It is a great shame to go back home with zero points. First of all, I'm very sorry for missing out on the probable victory and also for losing the lead in the championship, because I lost points. For me, it still has been a good weekend, I was strong. Now we have to start thinking about the next race track, I hope to ride there like I did this weekend. We hope to continue like this.
Tag: MotoGP Yamaha Honda Grand-Prix Racing France Le-Man Maverick Vinales Johann Zarco Dani Pedrosa Grand-Prix
Rating: 3.10/5 (10 votes cast)