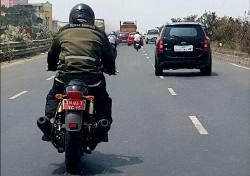 From the video and images which can be found on the internet, it is clear that the Royal Enfield GT750 also gets broader front and rear tires. This Royal Enfield is also expected to move to conventional 17-inch tires instead of the firm’s favored 18-inch rims.

The motorcycle will be a Cafe Racer in similar form to the Continental GT500 but with a beefier frame to handle the extra power. The brakes are bigger aw well. ABS will be standard for the international market, and given the upcoming regulations we expect that it will also be confirm the latest exhaust emission regulations...