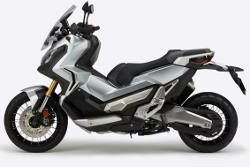 Honda combining its expertise in adventure bikes and scooters, the new Honda X-ADV crossover motorcycle is the brainchild of Italian Honda designer Daniele Lucchesi, whose aim was to take an easy-to-ride, nimble and frugal city commuter, give it some genuine back road ability and throw in a hint of off-road potential for good measure.

After some initial hesitation, Honda finally gave the green light for the project, and the first crossover motorcycle or adventure scooter, whichever way you want to look at it was born. It sounds outlandish, but in a way it makes a lot of sense: if you can have practicality and ability in the same package then why not? But is it a motorcycle or a scooter, and most importantly, what’s it like to ride?

It takes a while for me to take it all in as I stand and stare at the Honda X-ADV. It’s not only the concept of a crossover motorcycle that needs some processing, it’s also all the detail jumping out and demanding your attention. The angular, almost origami-like design has so many surfaces and intricate details that you could look at the motorcycle for hours. The build quality is just superb; every panel and component joins together with incredible accuracy.

Well-built it may be, but what exactly is the Honda X-ADV then? You could look at where the design was started: the engine and around 50 percent of the chassis are inherited from the existing Honda Integra scooter, and even with all the Africa Twin CRF1000L design cues, the overall shape of the machine is rather scooterish. But the same 745cc, liquid-cooled parallel-twin engine also powers Honda’s NC750 motorcycle range, which swings the argument right back.

And looking at the large spoked wheels (front 17-inch and rear 15-inch), long suspension travel of 154mm at the front and 150mm at the rear, the aluminum bash plate and the near-vertical exhaust, it starts to take on much more of an adventure bike guise. And how about the chain final drive and the motorcycle-style swingarm? It doesn’t look so much like a scooter anymore…

On the road, the large wheels and long suspension travel raise the seat height to 820mm, making this a very tall scooter indeed. To mount the machine you have to swing your leg over rather than step through, as the space in front of the seat is raised higher than on most scooters. The seat is fairly narrow at the front, and I think it would be difficult for some smaller riders to get a feet on the ground. 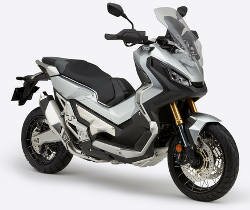 Moving off, the Honda X-ADV has an instantly recognisable scooter feel to it, with the large footboards and semi-feet forward riding position. The handlebars, however, are more like something you’d find on an adventure bike, and make it easy to counter-steer the machine like a motorcycle. Despite the substantial weight of 238 kilograms, it feels light on the move. The steering lock is generous and the Honda X-ADV is easy to maneuver, especially if you’re used to the scooter-style riding position.

Adventure-style foot pegs are available as accessories and they make a huge change in the ride feel. They’re positioned just behind the footboards, placing your feet further back, and making the riding position feel much more motorcycle-like. They are essential for light off-roading when you want to stand-up.

Overall, the Honda X-ADV manages to perform much better than the specification sheet would suggest, feeling lighter and more eager to go than we had expected. The engine produces peak power of 54 horsepower, and 68Nm of torque, so the power-to-weight ratio isn’t particularly great, but other than during high-speed overtakes, the Honda X-ADV never felt restrictively underpowered. The DCT settings have been slightly altered for this model, with shorter gear ratios, which makes acceleration feel swift and helps to get the most out of the power supply. You can choose from Drive, three levels of Sport, or Manual modes. The highest level of Sport mode proved to be the ideal choice for the unpaved roads we where riding, without having to worry about switching gears.

The Honda X-ADV will only be available as a DCT version, and no manual models are planned. Its claimed fuel economy is 3.05 liters for 100 kilometers, but in the real world we could expect a fuel efficiency of around 4.2 liters per 100 kilometers. Maybe the question is not whether this is a scooter or a motorcycle, but whether it offers the kind of ride that works for you. If you appreciate the carefree nature of scooters, but want a bit of an adventure flavor thrown in, this motorcycle is worth to look at.

The Honda X-ADV will be a premium priced motorcycle in Thailand, but the competitors such as the Yamaha TMAX (basic model 479,000 THB) and BMW C650 Sport (basic model 525,000 THB) also come with a heavy price tag.