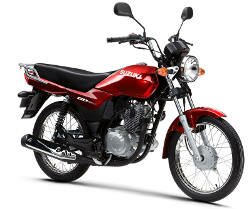 The Suzuki GD110HU is the quintessential commuter motorcycle – comfortable and efficient. It’s aimed at urban commuters with an eye on fuel efficiency. We’ve been consistently getting a figure of around 60 kilometers for a liter of fuel. This 113cc, single-cylinder, air-cooled engine is simple and reliable.

The engine revs quite freely which makes it easy to build speed. Low-end torque is adequate but we would have liked more, especially when there’s a pillion onboard.

Despite its humble positioning, the Suzuki GD110HU can teach a thing or two about refinement to competing motorcycle of its class. Rev it and you will be greeted by a nice exhaust note and no vibration. Feels nice when cruising around as well. The clutch isn’t too sharp though and you need to coax the engine at the beginning to get it moving. But the motorcycle feels light and agile.

The four-speed gearbox slots confidently every time. Yes, a fifth gear would’ve been nice but then there’s about as much power.

As I mentioned, the Suzuki GD110HU feel nice to chuck around in traffic. The front is a bit too light compared to say a similar-sized motorcycle but taking it into fast corners and turns isn’t a struggle at all. The riding position is upright and your arms do not feel stressed even after long rides.

The seat is long, wide and comfy for two adults. The suspension is on the softer side with an aim to keep potholes at bay. Which it does but expect a choppy ride at high speeds on bad roads with a pillion on board. The Suzuki GD110HU is at its best when you ride it unhurriedly.

I quite like the way the motorcycle looks. Nothing extraordinary, yet sharp and distinct; easily noticeable in a crowd of similar motorcycles. This design works well with the audience of this motorcycle.

The Suzuki GD110HU has lived up to the expectations we had from a motorcycle from one of the big brands in Thailand with its lineage.