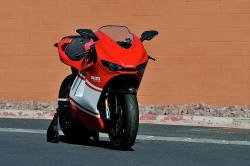 The ongoing story of Ducati’s forthcoming V4-powered road-legal superbike is sure to be the story in the business for 2017, and now the Ducati motorsport director Paolo Ciabatti has dropped more details about it.

Speaking to the press at the Imola WSBK round, Paolo Ciabatti confirmed the new motorcycle will be powered by a variation of the latst Desmosedici MotoGP engine.

‘There is not much I can say about this, honestly, but it is a kind of evolution of the plan for sportsbikes for Ducati,’ he said.

Developing a new engine for MotoGP in 2015 – which is what we are still using with some modifications and updates – was a good base for a production engine.

The project is there and you do not have to design a brand-new engine. You just need to make that concept work into a production engine.

The Ducati Desmosedici’s engine was designed in 2015 and was the first all-new engine used by the Italian company in MotoGP since it entered the class in 2003.

As before, it’s a 90 degree V4 but, unlike the previous Desmosedici – and the Desmosedici RR roadbike – it’s more compact and rotated backwards to site in a more conventional V4 position, rather than adopting the firm’s traditional L-type configuration.

The valves are operated by the desmodromic system rather than using conventional springs, and are closed with mechanical rockers. That makes the GP engine more suitable than most for conversion into a road legal motorcycle.

The big question over the road legal Ducati Desmosedici V4 remains whether it will be a straight MotoGP replica, like the old Ducati Desmosedici RR and Honda’s RC213V-S, or whether Ducati will instead give it a dose of its traditionally beautiful but avant-garde styling. Expect the latter given that this will be a mass-produced model, priced far below the Desmosedici RR.

Initially at least, the Ducati V4 is likely to be a supplementary model rather than a straight replacement for the Ducati V-twin Panigale line, which needs to be updated to meet Euro 4 rules, but Ducati might not want to desert its legions of V-twin-loving fans in a single stroke.