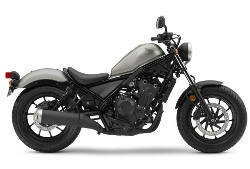 Yesterday evening the Thai made Honda Rebel 500 (CMX500) was officially launched in Indonesia. The new Honda Bobber-styled motorcycle received a positive response from the people that attended the launch party at the main Honda motorcycle dealer in Jakarta.

The main Honda dealer in Jakarta said that the demand for the Honda Rebel 500 was beyond what was estimated. Honda Indonesia will try to adjust the amount of imported motorcycles to keep up with market demand.