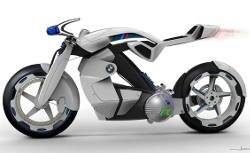 For years, I’ve been laboring the point that motorcycle design and technology follows that of cars. And often with a lag of many years. The finances of the motorcycle industry are very little compared to the automobile world, which is why for many years the two arguably most innovative two-wheel companies are Honda and BMW. Both have car divisions that can bankroll their less profitable motorcycle siblings, and cross-pollinate a whole bunch of technology that they could otherwise simply not afford.

It’s also why I was one of the few who openly applauded Audi’s takeover of Ducati. And me, a 1098owner, no less. Has Ducati lost its Italian flair in the interim, as everyone feared? Nope. But their financial is certainly more secure.

Well, despite this inspired wisdom on motorcycle hand-me-downs, things might be about to change. Road transportation is at a turning point, after which, cars are going to be very different beasts than the ones we’ve grown up with. Some of the latest car design studies have no windows, because nobody will need to see where they’re going. Afew interiors offer swiveling seats around a central table, so the occupants can have a business meeting, or share in a friendly family environment while hurting down the highway. One recent BMW study featured bookshelves no less, illustrating the company’s confidence in accident-free autonomous motoring.

There’s nothing like a few hefty tomes flying through the air to liven up the experience of a frontal collision.

The impression is that future motoring will offer anything but hands-on-driving, although for me, that exhilaration is still as much a reason to get behind the wheel as the need to transport myself from A to B. Proof of that has my choice of cars over the years, which, while entertaining to drive, often had only a 50:50 chance of getting my back from B to A again.

But Mercedes tuning division AMG has expressed an intention to program its future cars; semi-autonomous systems to read their drivers’ preferences and abilities, and help educate them into more proficient skills by demonstrating the ideal line, and gradually allowing more exciting performance to be permitted. It’s an electronic version of having your father in the passenger seat back when you first learned to drive. 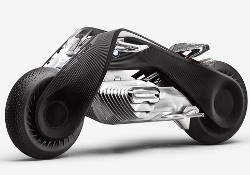 Honda too has announced its ‘Electric Vision’, featuring similar intelligent software. Speaking at the 2017 Geneva Motor Show, Katsyshi Inoue, President of Honda Motor Europe, also outlined Honda’s commitment to an electric future in Europe, with a specific aim to have electrified powertrains in two thirds of European cars sold by 2025. Perhaps in that respect, motorcycles are again lagging behind.

Alternative energy sources aside, it’s the autonomous aspect of cars that will have the most profound effect on the way they are used, purchased and valued. And while it may seem that it’s a technology the automotive world is forcing on us against our will, a surprising percentage of car buyers have indicated they would welcome having that option, Partial automation is already with us. My wife’s new car does all sorts of things on its own that’s quite alarming to a hands-on driver like her husband. But autonomous development isn’t aimed at people like me. The idea that my car can go find its own parking spot after I arrive at the restaurant, or drive me home after the fifth bottle of beer makes a lot of sense. But other than that, you’ll have to wrestle that steering wheel out of my hands.

The direction this is all heading is linked with a reduction in the perceived value of objects – cars in particular. People, especially younger ones, see transportation as a necessity, with ownership being less relevant than mobility. Pride is rapidly being replaced by ease of use, at which point possessions start to lose their value. This shouldn’t be surprising in a world where our richest entrepreneurs don’t physically build anything, own the items they sell, or the accommodation and car services they offer. This last example is particularly poignant, because the car industry has been teaming up not only with software developers like Google for their autonomous vision, but with Uber and others. Thing self-propelled transportation pods, just like in the old science fiction movies.

Where this leaves the likes of Ferrari remains to be seen, but I’m more concerned about the future of motorcycles in the environment. BMW’s Vision 100 went some way to mirroring AMG’s intelligent software, learning the rider’s skill level, and allowing increasing lean angles as competence was demonstrated. But this advanced motorcycle concept was just that – non-functioning, and with no explanation of how it all worked in the real world. And is this technology really applicable to motorcycles? If I’m reluctant to let Big Brother take over my car, I sure as heck don’t want him interfering with my motorcycle.

Motorcycles are a whole different world from cars. Cars like my wife’s can brake on their own if the driver doesn’t spot a hazard, which is great news if your motorcycle is being tailgated by a distracted mum with an big SUV full of kids. But a self-braking motorcycle would be disastrous. IT may indeed stop in time, but unless the rider is somehow secured, like with the BMW C1 scooter, they’ll go flying over the handlebars and head-butt whatever the motorcycle managed to miss. IT also assumes the motorcycle is perfectly upright. If not, changes are it’s going down, and hitting the object on its side.

Robotics are playing an increasing role is many aspects of our lives, but it’s hard to see how some of the latest technologies are going to be applicable to motorcycles. Anti-lock brakes and traction control have made them safer, and features like variable engine mapping or suspension settings on the fly have improved the function. Lane drift sensors may have some merit, but after that, we’re about done.

There has already been a kick-back against high-tech motorcycles, visible by the increased interest in cafe racers, scramblers and other old style motorcycles. Either home -made or off-the-shelf, many are based around pretty rudimentary technology. Whether or not this is long-term trend, it indicates a re-establishment of the core values of motorcycling – freedom, connection and simplicity. All three are gradually being reduced in cars, especially the connection aspect, with a greater reliance on automated back-up for distracted driving.