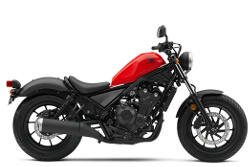 Honda’s Rebel 500 or CMX500 is a custom-styled alternative to the sporty CBR500R and naked CB500F. It uses the same 471cc parallel twin engine, with the same claimed performance of 49.6 horsepower (35kW) and 43Nm peak torque, with the latter figure shifted 1000rpm lower in the rev range than the other Honda 500cc class models.

The chassis is bespoke to the Rebel 500, with a steel tube double cradle frame continuing to loop round the back of the single seat, a steel tube swingarm, 41mm unadjustable Showa forks, Showa preload-adjustable rear shocks, and a 264mm single front brake disc with Nissin two-pot caliper and, of course, ABS.

Wheels are 16-inch front and rear, the fuel tank holds 11.2 liters, seat height is only 690mm and kerb weight is 190 kilograms. This makes the Honda Rebel 500 extremely compact and highly manageable – a small child could ride it, so nobody will have trouble finding their feet on the ground.

But, thanks in part to its low-slung bobber styling, the Honda Rebel 500 manages to avoid looking like a toy. The blacked-out styling (engine, frame, wheels, forks, handlebars, clock, exhaust, rear hugger, and shocks) and raised front end lend it an air of substance.

The Honda Rebel 500 has a generous riding position that belies its proportions, with a nicely canted-forward stance, mid-placed pegs. You obviously sit fairly deep in the motorcycle, but there’s no sense of being cramped – leg-room is decent, the seat is comfy and, crucially, you aren’t forced into a tiring, feet-forward, semi-reclined slump.

You don’t ave to throw a leg over the low seat so much as raise your foot slightly – but, all aboard, the sole digital clock stares back (no tacko, but it’s got a fuel gauge so it’s one-up on Honda’s new CBR1000RR Fireblade) and, once you locate the ignition barrel on the left side by the headstock and the start button beneath the hazard lights, the engine burps into fussy life, chattering away on tickover.

Initial riding impressions are pleasant surprise. The engine’s 49.6 horsepower output limits the motorcycle's potential for arm-wrenching punch, but the power delivery's emphasis is on smooth, user-friendly riding – and there’s plenty of that. The Honda Rebel 500 zips along and feels way more sprightly than it looks like it should, happy at 130km/h without sounding like it’s on the verge of exploding. Controls are great: gearbox is a bit clunky but all there, clutch is one-finger light, steering is direct and weightless, brakes are plentiful and grip from the Dunlop D404 tires is sufficient for some enthusiastic riding.

And it’s the Honda Rebel’s chassis that really impresses. Cruiser and Bobber style chassis types often have severely limited ground clearance and sometimes appallingly cheap suspension. The Honda Rebel 500 has neither – ground clearance is obviously limited, but you have to be riding it heartily to find the pegs on the desk and, if you do, you’ll not find the suspension giving up at around the same time. The Honda Rebel 500 is a long way from plush, but its Showa springs have enough performance to hold the motorcycle on the road and in control when you need them to.