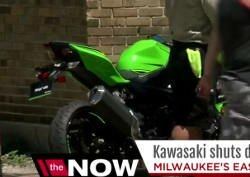 The engine appears to be a new unit, the old Ninja 300 engine was unable to pass the European EURO4 exhaust emission regulation. The engine of the Kawasaki Ninja 300 parallel twin has its roots in the GPz250’s engine, introduced way back in 1983, a replacement is well overdue. The clutch cover appears to be positioned higher, as is normal on more modern engine and transmission designs.

While increasing the capacity from 300cc to 400cc might seem a leap, it makes sense given that Kawasaki’s rivals are also getting larger. Yamaha’s YZF-R3 uses a 321cc twin, KTM’s Duke 390 has a 373cc single and Honda’s expected CBR350RR is expected to be a 350cc parallel twin.