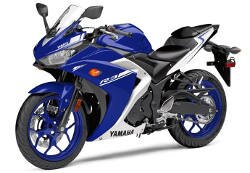 Given that all motorcycles in this class are now being developed with one eye on the new Supersports 300 world championship that supports WSBK, there’s incentive for manufacturers to improve the specifications of the roadbikes the racers are based on.

Likewise, Kawasaki has long been expected to reveal an updated version of the Ninja 300 / Ninja 250 twins. The existing models don’t meet Euro 4 emissions rules and can therefore only continue to be sold in Europe under end-of-series regulations that expire at the end of 2018.

Throw the upcoming BMW G310 into the mix – it might even spawn a BMW G310RR – and there’s a recipe for a burgeoning class of baby sportsters….