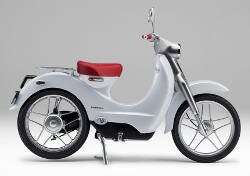 This will certainly lead to larger electric motorcycle and scooters; note he said models, not model. Centering their automotive attention on hybrids links nicely with the Neowing concept, a leaning 3-wheeler (trike) with a large-capacity flat-four engine backed by electric power. Shown at the same Tokyo Motor Show as the Honda EV-Cub, the combined power sources and single-sided shaft drive rear are expected to be on the next-generation Goldwing motorcycles. And Honda aren’t involved with Mugen’s TT-winning electric racer just for the crack.

Expect other futuristic whatnots. Hachigo talked about ‘collision-free’ cars and how sensing technology will not be on all new cars for Japan. They’re developing auto lane-change tech and want fully automated motorway driving by 2020. Two-wheelers are obviously different, using steering for balance as well as cornering, however motorcycles won’t escape electronic assistance. Honda’s self-balancing ‘Riding Assist’ NC750 was shown earlier this year, showing their desire to make future motorcycles as hard to prang as cars.