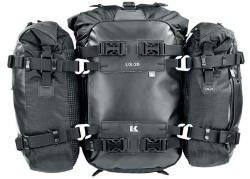 When it comes to motorcycle luggage, my preference is usually a set of soft saddle bags; you can throw them on and off easily, and they make sense whether you’re packing for a day trip or a months-long adventure. This was all good and well, until I tried to install my trusty old saddle bags on a modern sportbike; it just doesn’t quite work. The narrow and sloping tail, and the minimal strap points can make it all a bit difficult, so I looked for something else.

Having bought their stuff in the past, it wasn’t long before I found my way to the Thai re-seller of Kriega luggage. Kriega is an English brand that specializes in tough motorcycle bags for the road and adventure. They make all kinds of stuff, but I was drawn to their Tailpacks because they can sit over the pillion seat and have been designed to work with modern sportbikes.

I settled on a 40-liter combo, which consists of the 10-liter bags and one 20-liter bag (which I already owned). The bags strap together in a variety of configurations, or you can just use one depending on the application and need. I find that the 20-liter on the bottom and a 10-liter on top works well for me, but it’s nice to know that I have more space if need be.

It you answered yes to any of these questions, then Touratech suspension is just what you’re looking for. Touratech suspension will transform your motorcycle into the ultimate adventure riding machine, providing enhanced rider comfort and a more sensitive response than the standard units.

Originally meant to be exclusively for the Japanese market, the Yamaha Aerox 155 has become a popular scooter in Thailand, prompting local scooteristas to fall in love with the Aerox 155.

The modern features of the Yamaha Aerox 155 have pushed the scooter to a higher level, going against previous impressions that it’s only good as a daily commuter. With the Yamaha Aerox 155’s improved styling and design, riding on the crowded city streets is now an enjoyable experience.

Even scooter fashionistas will love the the Yamaha scoot’s blend of smartly graphics and contemporary design. The twin-eye LED headlamps add to the sporty and aggressive stance. There’s performance to back up this image, too.

Marc Marquez took his second win of 2017 and his eighth in a row at the Sachsenring after starting from pole position, with teammate Dani Pedrosa joining him on the podium to complete the fourth double-podium finish (Austin, Jerez, Catalunya, Sachsenring) for Repsol Honda in nine races.

Marc and Dani got away from the front row brilliantly at the start, entering the first corner in first and second places, respectively. On lap five, Jonas Folger moved past Dani, and he overtook Marc on the following lap. Marc moved back on top on lap 11 and went on to take a momentous victory that earned him the lead in the Championship before the four-week summer break. Marc dedicated his 31st MotoGP win (the same tally as Eddie Lawson) to Nicky Hayden, who passed away in May.

Some people zig while others zag, and it’s no different for companies. Vozz Helmets, an Australian company, is one that zags and is taking a different approach to designing what it claims to be a safer motorcycle helmet than the traditional pull-on, pull-off full-face helmet.

Let’s face it, in its most basic form, the traditional full-face helmet has not changed in several decades – you pull it on and do up the chin strap until it’s tight, then reverse the operation to remove it.

Starting from a clean slate, Vozz Helmets has redesigned the full-face helmet in a staggering way by creating a rear-access, dual-locking helmet, and hopes to make the chin strap-equipped, pull-on, pull-off motorcycle helmet history.

Marc Marquez (Repsol Honda Team RC213V) continued his astonishing Sachsenring record today, scoring his eighth consecutive race victory at the challenging, undulating German venue. Yesterday he had taken his eighth successive pole position at the track. This is a unique performance in 69 years of motorcycling’s World Championships, with Marquez scoring the pole/win double in the 125cc class in 2010, in Moto2 in 2011 and 2012 and in MotoGP in 2013, 2014, 2015, 2016 and 2017.

Most importantly, the 24-year-old Spaniard’s second win of the year moved him into the World Championship lead for the first time this season. The reigning World Champion now leads the title chase by the narrowest of margins, with the top four riders separated by ten points, an all-time record in premier-class history.

Marquez led away from pole position ahead of team-mate Dani Pedrosa (Repsol Honda Team RC213V). But local hero Jonas Folger (Yamaha) soon closed in on the pair to take the lead on lap six. He stayed there for several laps but then Marquez went back ahead. The two stayed within metres of each other until the last few laps when Marquez’s pace on used tyres pulled him three seconds clear of Folger.

However the honor of being the winningest Yamaha rder in MotoGP with 55 Grand Prix wins still stands with Valentino Rossi. This comes almost 57 years to the day when Fumio Ito astride the Yamaha RD56 went on to win the 1963 Belgian 250cc Grand Prix. Some of the greatest riders in the world like Jarno Saarinen, Phil Read and Kenny Roberts cut their teeth on Yamahas while many established stars like Giacomo Agostini and Valentino Rossi used it to further add to their glory.

KTM have done many things for motorcycling since emerging in 1953 with a Rotax-engined two-stroke enduro motorcycle. The biggest off-road manufacturer by a good amount of units, KTM are fast becoming a giant in the road legal motorcycle industry, if they aren’t already.

Despite booming adventure bike sales and MotoGP projects, at their core is off-road, at the core of off-road is enduro, and at the very core of enduro is the two-stroke. Without the two-stroke engine, enduro is half cut.

The problem for two-stroke engines is emissions laws that are putting the thumb screws on smokey engines. Off-road manufacturers have been working hard to design more lean-burning carburetor engines but ultimately they are doomed.