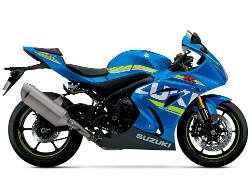 If you ask me why it took so long to develop the new Suzuki GSX-R1000. The answer is that the 2017 Suzuki GSX-R1000 is the most important model for Suzuki, and it was frustrating that we couldn’t release a new model until now. Some years ago, Suzuki’s motorcycle focus switched to the Asian market and small motorcycles, but after that they started to think again, and ask: ‘What is the strong point of the Suzuki brand?’

The answer is sportbikes, so then we could restart the project. But I had to explain very carefully, to the management, why we need to make such a motorcycle, because the normal customer can’t use such high performance.

The Suzuki GSX-R1000 is not specifically developed for track racing or road use, I think the divider between road and track is 50:50. If we engineers think to change something, we always think first about racetrack performance. But if it’s not good for street performance we have to rethink it, because if we throw away the street performance it’s not a GSX-R. 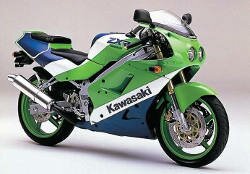 Despite persistent rumors, the chances of Kawasaki developing a four-cylinder 250 ~ 300cc rival to the Yamaha YZF-R3 and Honda CBR250RR are slim.

The story appears to trace back to leaked images of a styling model for a new Kawasaki Ninja 250 or 300. Far from being a four-cylinder, it was a proposed revamp for the existing parallel-twin.

The idea of a 250 or 300cc inline-four, harking back to the early 1990s and days of the Kawasaki ZXR250, which made 33kW from its screaming, miniature four-cylinder engine, is tempting. But it’s a dream that would be near impossible to achieve today. 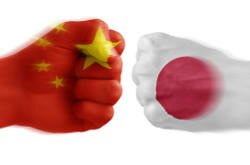 With the influx of cheap 125 to 200cc motorcycles, buyers are left facing a tough decision – pay a premium for a Japanese or opt for the budget choice. With prices for Chinese-built motorcycles starting at just around 30,000 THB, rather than near 60,000 THB for a Japanese brand that is often made in Thailand, you can see why so many cash-strapped riders plump for the cheaper option.

According to industry figures in 2016, the major players in Thailand’s 125 to 200cc market from China were Lifan, Zongshen and Keeway while Honda, Yamaha and Suzuki represented Japan with KTM the only European.

When it comes to depreciation all of the manufacturers fare similarly and record depreciation percentages in the 30 percent area. On the Japanese or European motorcycles, which cost a premium to start with, this equals a greater loss of capital, making the Chinese machines certainly appear better value for money. However, there is a catch. 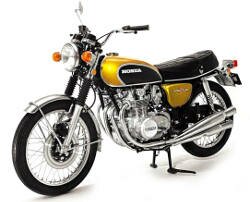 Honda have announced that they have formed a team of engineers from Japan and Thailand to work in India to develop a middleweight 350 to 500cc motorcycle that will compete with Royal Enfield.

Noriaki Abe, due to become CEO of Honda on the 1st of April, said they want to take a slice out of Royal Enfield’s annual 590,000 units domestic Indian sales. The product will at a later stage undoubtedly also be sold in other Asian and Southeast Asian countries if not globally. 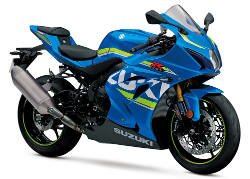 Suzuki is finally going to release an all-new GSX-R1000 with upgrades to make up for an eight-year gap between new models.

We’re told that the jump in price is significant from the outgoing model, but buyers can expect much more bang for their money, with the motorcycles now the performance-class leaders. 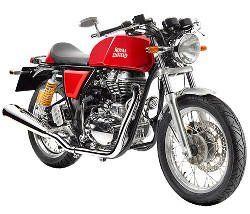 We have seen what appears to be a finished version of Royal Enfield’s new Continental GT750 undergoing testing, some people already reported that they saw an 750cc parallel-twin Royal Enfield in Spain last year. Sources at the time suggested it would be released around March or April this year and based on the finish of model we have seen, we don’t think it’s far away.

The beating heart of the new Royal Enfield Continental GT is an air-cooled 750cc parallel-twin, which is expected to produce 45 to 50 horsepower putting it in the same territory as the Harley-Davidson Street 750 (47 horses) and Triumph’s similarly-styled Street Cup (54 horses).

Also new are the upswept two-into-two exhaust, as all Royal Enfields have previously been single cylinders, and judging by the Royal Enfield Continental GT750s rather tasty exhaust nite we expect it to have a 270-degree firing order. 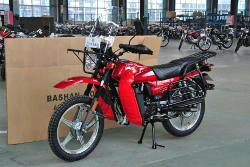 The year 2016 in China saw the continuing trend of declining sales domestically and a slight downturn in exports to traditionally safe Chinese markets like Latin America and Africa. This is causing more Chinese manufacturers to turn their attention to the European and American markets.

Despite the expression ‘scrambler’ not meaning what it used to a cursory look around a Chinese motorcycle exhibition will reveal that it is this type of motorcycle that is ‘trending’ at the moment. At last year’s Canton fair I approached the exhibition stand for each different manufacturer and asked them which of their models had achieved the Euro 4 certificate of conformity. After the usual replies of ‘all of them’ I asked to see a copy of the certificates and eventually the truth was revealed that only one or two models actually had a Euro 4 certificate of conformity. 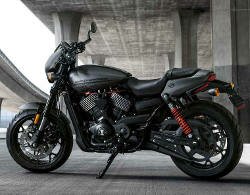 It is almost two years ago that Harley-Davidson reintroduced the Street Rod name, which last appeared on a V-Rod-derived motorcycle in 2007. But we could not expect the new generation Street Rod to be quite like this.

Racking a High Output version of the Revolution X 750cc engine, with 18 percent more power (about 50kW at 8,750rpm) and torque up eight percent compared to the regular Harley-Davidson Street 750, the H-D Street Rod will be one of Harley’s least expensive machines. 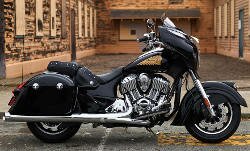 America might have lost two of its motorcycle brands with the recent closures of both Victory Motorcycles and EBR, but the former’s sister company, Indian, is growing at a rapid pace. New documents show that an additional three models will soon be joining the Indian Motorcycle range.

The Polaris-owned firm has filed emissions certification documents for new models under the ‘Chieftain Elite’, ‘Chieftain Limited’ and ‘Roadmaster Classic’ names. While the documents show the motorcycles will be powered by the same 1811cc ThunderStroke V-Twin as Indian’s other large-capacity models, there’s little else to go on regarding their technical details. 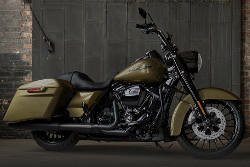 The front wheel size has changed to 19 inches, and the fork has been redesigned to improve damping control. The shocks are also new, with hydraulic spring preload (rather than air) adjustment.

Where’s the windscreen? Gone. What’s going one with those saddlebags? Harley-Davidson has wrapped them around the exhaust pipes to make the motorcycle look lower. Why the makeover? If you have to ask, it’s probably not for you.